The kikuru was a neodinosaurian cryptid reported from swamps in the northern Democratic Republic of the Congo, described similarly to the more famous mokele-mbembe of the Republic of the Congo.[1][2] According to the colonial civil servant Fernand Wilmet, the kikuru was alleged to live in the Maika Swamp, north of the Nepoko-Ituri region, where it is only observed at the beginning of the monsoons, after some days of rain, always heading downstream into the swamp. It was described as a huge animal, ten to twenty metres in length, with black crocodile-like scales, a long and thin neck, and a horn the length of a man's arm, which it used to hack through dense vegetation. Wilmet did not know if it was supposed to have feet or flippers because it was alleged to never come ashore, but he compared it to a plesiosaur, not a sauropod. The roar of the kikuru was said to resemble thunder, being nothing like the comparatively quiet trumpeting of an elephant.[2]

Neodinosaurs have also been reported from the nearby Ituri Rainforest.[3] Roger Courtney (1902 – 1946 or 1949) recorded stories of "what appeared to be a dinosaur," reported by blacks and whites alike, in the Ituri. Although he felt that many of the stories were exaggerated, Courtney believed that "some enormous, odd creature" might exist in the rainforest swamps.[4] Thomas Alexander Barns (1881 – 1930) also once came across a drawing of a sauropod-like animal on a hut in the Ituri.[5] 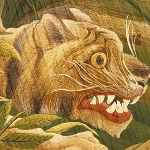